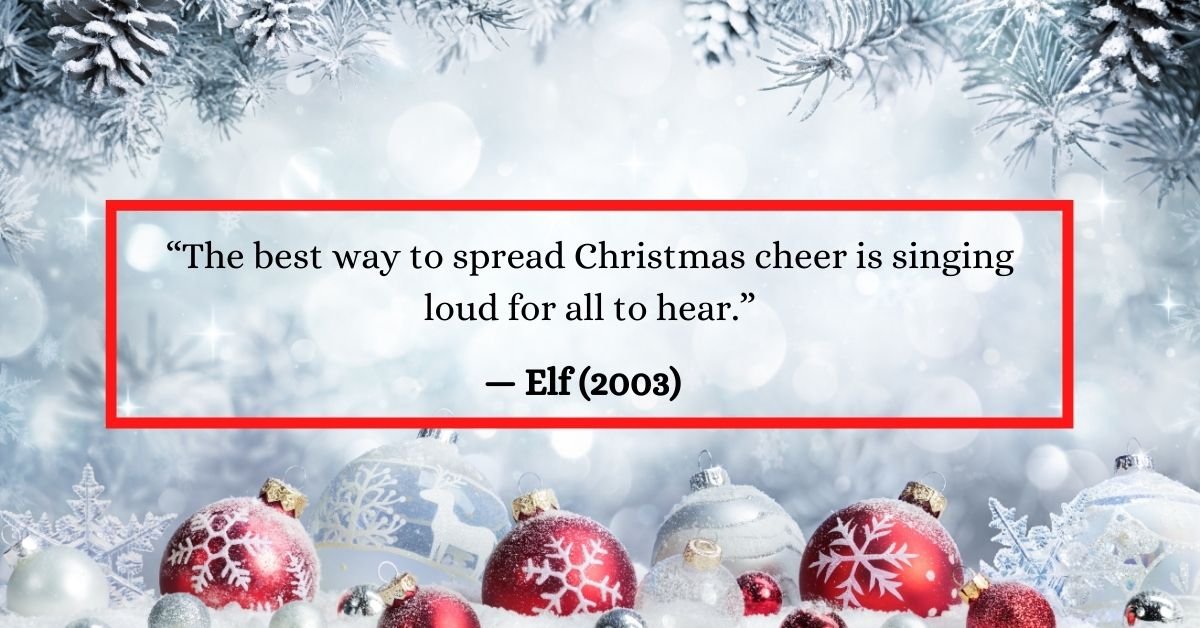 Let’s greet our friends & family members in a special way by sending them their favorite ” Christmas Movie Quotes “. So, let’s check out the list of 60 most Popular Dialogues now !

“Christmas is just about my favorite time. Ever since I was a little kid, I always felt like it was my own personal holiday.” — Ernest Saves Christmas (1988)

“Seeing is believing, but sometimes the most real things in the world are the things we can’t see.” — The Polar Express

“Christmas was on its way. Lovely, glorious, beautiful Christmas, upon which the entire kid year revolved.” — Adult Ralphie from A Christmas Story” (1983)

“It’s Christmas Eve. It’s the one night of the year when we all act a little nicer, we smile a little easier, we cheer a little more. For a couple of hours out of the whole year, we are the people that we always hoped we would be.” — Scrooged (1998)

Related: 231+ ‘Funny Christmas Quotes’ that you will Die of Laughter!

“That’s what Christmas memories are made from. They’re not planned; they’re not scheduled. Nobody puts them in their blackberry. They just happen.” — Deck The Halls (2006)

“And there were in the same country shepherds abiding in the field, keeping watch over their flock by night. And lo, the angel of the Lord came upon them, and the glory of the Lord shone round about them: and they were sore afraid. And the angel said unto them, ‘Fear not: for behold, I bring unto you good tidings of great joy, which shall be to all people. For unto you is born this day in the City of David a Savior, which is Christ the Lord. And this shall be a sign unto you; Ye shall find the babe wrapped in swaddling clothes, lying in a manger.’ And suddenly there was with the angel a multitude of the heavenly host, praising God, and saying, ‘Glory to God in the highest, and on earth peace, goodwill toward men.’” — Linus Van Pelt from A Charlie Brown Christmas (1965)

We’re kicking off our fun old-fashion family Christmas by heading out into the country in the old front-wheel-drive sleigh to embrace the frosty majesty of the winter landscape and select that most important of Christmas symbols.” — Clark Griswold (Chevy Chase) “National Lampoon’s Christmas Vacation” (1989)

“I don’t think anyone would criticise us for laying down our rifles on Christmas Eve.” — Joyeux Noël (2005).

“Faith is believing in things when common sense tells you not to.” — Doris Walker, Miracle on 34th Street

“I myself believe that when it comes to matters of the heart, the only sin is turning your back on love because of what other people think. “— Holiday, Holiday Heart

“It’s Christmas Eve and we are going to go celebrate being young and being alive.” — Miles, The Holiday

“I’ll just be hanging around the mistletoe, waiting to be kissed.” — Mia, Love Actually

“You have such a pretty face, you should be on a Christmas card.” — Elf

“Another crisis solved. Yeah, there sure are a lot here. Well, all families start to come together. We always get together at Christmas. Yeah, life would just pass in a blur if it wasn’t for times like this.” — A Muppet Family Christmas (1987)

“Arthur! Christmas is not a time for emotion!” — Hugh Laurie in Arthur Christmas (2011)

“This is extremely important. Will you please tell Santa that instead of presents this year, I just want my family back.” — Home Alone (1990)

“If you look for it, I’ve got a sneaky feeling you’ll find that love is actually all around” — Love Actually (2003)

“I never thought it was such a bad little tree. It’s not bad at all, really. Maybe it just needs a little love.” -A Charlie Brown Christmas (1965)

“Just remember, the true spirit of Christmas lies in your heart.” -The Polar Express (2004)

I planned out our whole day. First, we’ll make snow angels for a two hours, then we’ll go ice skating, then we’ll eat a whole roll of Toll House cookie dough as fast as we can, and then we’ll snuggle. – Elf

There’s a certain magic that comes with the very first snow. For when the first snow is also a Christmas snow, well, something wonderful is bound to happen. – Frosty the Snowman

I never thought it was such a bad little tree. It’s not bad at all really. Maybe it just needs a little love. – A Charlie Brown Christmas

And we’re going to have the hap-hap-happiest Christmas. – Christmas Vacation

You’ll shoot your eye out kid! – A Christmas Story

Strange, isn’t it? Each man’s life touches so many other lives. When he isn’t around, he leaves an awful hole, doesn’t he? – It’s a Wonderful Life

But for now, let me say. Without hope or agenda. Just because it’s Christmas. And at Christmas, you tell the truth. To me, you are perfect. – Love Actually

Just remember, the true spirit of Christmas lies in your heart. – The Polar Express

It was the afternoon of Christmas Eve and Scrooge was conscious of a thousand odors, each one connected with a thousand thoughts and hopes and joys and cares long, long forgotten. – The Muppet Christmas Carol

This is Christmas. The season of perpetual hope. – Home Alone

Rudolph, with your nose so bright, won’t you guide my sleigh tonight? – Rudolph the Red-Nosed Reindeer

I’ll just be hanging around the mistletoe, hoping to be kissed. – Love Actually

I suppose it all started with the snow. You see, it was a very special kind of snow. A snow that made the happy happier, and the giddy even giddier. – Frosty the Snowman

It’s Christmas Eve. A time of mystery, expectations, who knows what might happen. – The Nutcracker and the Four Realms

I don’t know what to say, but it’s Christmas, and we’re all in misery. – Christmas Vacation

If you look for it, I’ve got a sneaky feeling you’ll find that love is actually all around. – Love Actually

Well, in Whoville, they say that the Grinch’s heart grew three sizes that day. – Dr. Seuss’ How the Grinch Stole Christmas

You’re skipping Christmas! Isn’t that against the law? – Christmas with the Kranks